by Asbjorn Lonvig, artist/designer Link to me - I'll reciprocate. Contact me  Site navigation.

In this biography I will concentrate upon why I became an artist
and my personal background for becoming nothing else.
I was born in 1949 in the Danish city Brande, which since then has become famous for its murals
of which - of course - the most popular is that of mine.

My father was a very busy man avoiding any domestic conflicts by telling a joke,
leave home and work, work, work.
My mother was psychologically extremely unbalanced -
for reasons I understand better today.

As I realized this I took a break to recover from that lifelong depression
due to a total lack of reasonable values.
As I had reached the goals I was taught -
and reviled the emptiness of those goals - sure a break was necessary.
In this period of time I made the paintings in "Sad Days" - Exhibition of Paintings.

I went back to a new life.
I became a person.
I became me.
Alowing myself to feel.

Figuring out my own goals.
I re-found my own very unique artistic expression -
for the right reasons - in simple shapes and bright colors.
Which is not only an artistic expression - it's an attitude of life.
My artist statement is: Colorful Simplicity in Art as in Life. 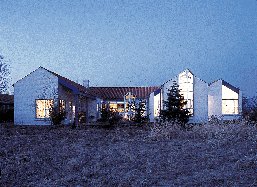